Twelve additional white-tailed deer tested positive for Chronic Wasting Disease (CWD) in the infected Beltrami County farmed deer herd, five adult does and seven fawns. The Board of Animal Health (Board) first reported this CWD positive herd in April when a 3-year-old doe tested positive for the disease. Earlier this month, the remaining 54 animals in the herd were depopulated by the USDA and samples from each animal were collected and then tested at the National Veterinary Services Laboratories.

During an inspection of the Beltrami County premises following the quarantine of the herd, a Board agent discovered several adult deer and fawn carcasses had been moved by the owner to nearby county-managed tax-forfeit land. This spurred an investigation by the Board, which has been working with the Department of Natural Resources (DNR), Pollution Control Agency, and tribal and local officials to mitigate any potential spread of CWD from these carcasses. Due to test results that indicate CWD-causing prions are on this site, agencies are currently working with the county to build a fence that would prevent wild deer access to the site and reduce the risk of prion exposure. The DNR is following its CWD response plan and is planning to test hunter harvested deer this fall to understand whether CWD is in wild deer in this area. The Board’s ongoing investigation will address possible violations of Minnesota animal health laws.

Of the 12 additional CWD positive animals most recently identified, nine were born on the Beltrami County farm and three were moved to the farm from other Minnesota herds. These herds are considered to be CWD exposed since there is a possibility the animals could have been infected with the disease prior to being moved to Beltrami County. One of the CWD exposed herds (Winona County) was officially quarantined during the Houston County positive herd investigation. The other two CWD exposed herds in Hennepin and Kanabec Counties were quarantined Thursday, May 20. Three additional CWD exposed herds located in Mille Lacs, Morrison and Mower Counties received animals from the Kanabec County herd and were quarantined on Friday, May 21. The Board is working to identify and test animals in all of these CWD exposed herds that resided in a herd at the same time as a CWD positive animal.

Please review the attached diagram for a visual representation of the exposed herds and their connection to one another.

CWD is a neurological disease of the deer and elk family caused by prions, and is always fatal. The disease can be spread by both direct (animal-to-animal) and indirect (environmental) contact with infected Cervidae. Prions are shed through saliva, urine, blood, feces, and antler velvet and are known to persist in the environment for years. Additionally, carcass remains from a dead infected deer can serve as a source of further infection to other Cervidae. Consuming meat from CWD infected animals is not advised.

Click here to view an accessible version of this diagram. 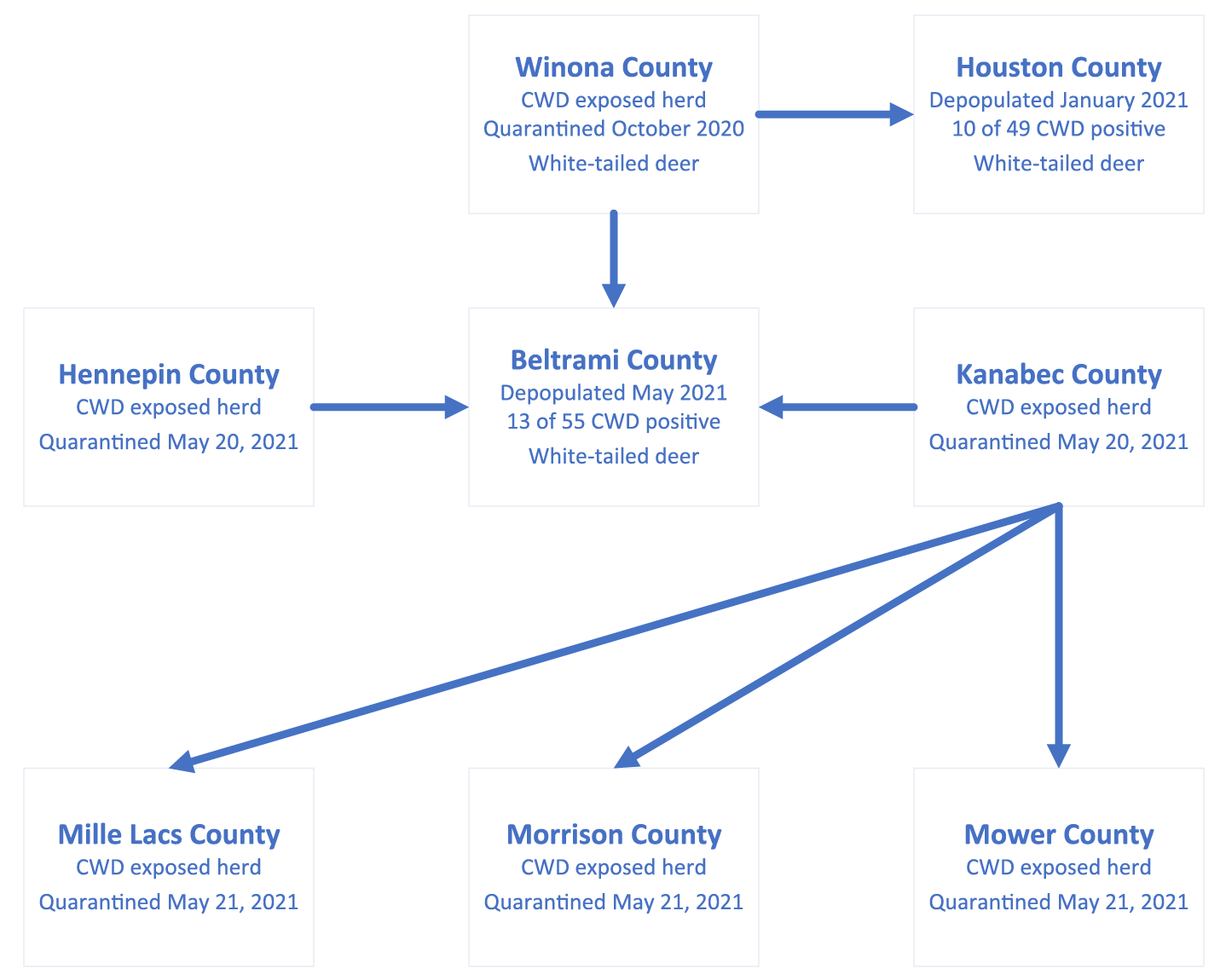